Where are you going?
How many guests and rooms?
Photos Description Rooms and prices Location Services Reviews
Main Albania Korçë County Korçë

9.2
Super
Based on 93 reviews
Read reviews 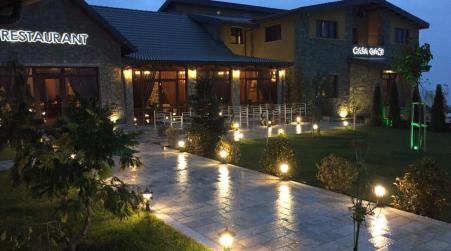 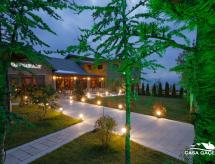 The distance from the hotel to Korçë city's center is approximately 0,1 miles. In the center you will also find Tradita. The four-star Casa Gaçe hotel in Korçë city is a wise and sensible choice, which gives the chance, on the one hand, to save money and, on the other hand, to spend time with a full range of services.

Among other things, for guests of the hotel, not far from the Restaurant casa gaçe, there is a restaurant and an outdoor fireplace. Besides, some suites come with a city view. In the rooms, the set of bed linen comes with pillows with non-feather filler.

Quite a lot of good places and landmarks are situated not far from the hotel, for instance the Red Tower a 22 minute commute on foot away. The hotel is situated at Rruga Çlirimi I Korçës, where there is well equipped infrastructure, here you have the opportunity to find theme parks, taxi ranks, fashion stores, among them there is Sandri 2 drugstore within a 17 minute trip on foot and Zeta beauty shop 1,1 miles away.

The hotel, with a gorgeous cafe Casa Gaçe, is located in Korçë city not far from the Kastoria National Airport Aristotelis in 28,7 miles and the Cafe/Bar Casa Gaçe in 0,1 miles.

The Casa Gaçe hotel has received lots of positive reviews, for example, the guest Ioulita says: The hotel is one of the best ones we’ve been to in korçë. Everything was super clean and the staff was very friendly! , in particular the traveler Tea, who lived in the suite Suite with Balcony writes: The hotel facilities were great! The place was nice, very comfy and luxury. The staff was very good too! In addition to this, Julinda wants to mention the following: I didn't like the restaurant, poor menu, worst soup ever. I think they should change the shef immediately! 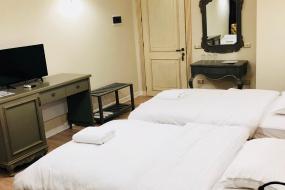 Free private parking is available on site (reservation is not needed).

Question-answer
It's been a long time since anyone has asked us questions )
We will be happy to give an answer ...
Please, ask your question
Webcams • Casa Gaçe Hotel
After booking, you will receive a confirmation email
The staff will answer your questions and give you recommendations
Search for available rooms

Casa Gaçe Hotel
Was this information useful?
Select the language and currency

Casa Gaçe Hotel
x
You may be interested in this!
View the offer
Select dates